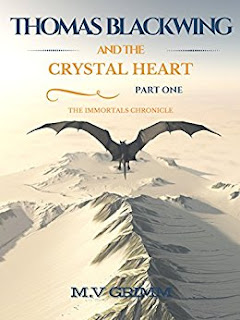 Fourteen years following the assassination of the royal family, the Aries Council prepares to elect a new ruler. The King’s Candidates event is lauded as the premiere event for first-year cadets anxious to secure their place in history. Hailing from three of the most prestigious schools in the kingdom, knights, wizards, witches, and rangers will compete to secure their place behind the throne.
Among the brave contestants stand a pair of fourteen-year-old orphans. Their shared quest will pit them against each other, but a strange turn of fate will seal their bond. As an ancient mystery begins to unravel, startling revelations and mystifying incidents around them lead to a sinister game of deception.


Will they solve the legend of the Seven Immortals before the chaos of a great war erupts?

Thomas Blackwing & the Crystal Heart enters you into a fantastical fantasy land filled swords and sorcery. Think Harry Potter meets the Hobbits and you, kind of get the vibe for this coming of age fantasy story.  A brand new story from brand new author M.V. Grimm the overall the story has magic potential, yet Grimm’s layout of storytelling leaves you as the reader lacking to get fully drawn into the story. I wanted to get drawn into this story for there were some good parts in which I was drawn into, then Grimm made an odd choice of writing style and lost me causing the writer in me to cringe. His chapters with his two main characters Thomas and Will shine brightly though. These are two characters are strong, likable, and well-constructed characters that you will fall in love with instantly. Sadly, the rest of his world and characters fall short compared to Thomas and Will.

Perhaps this is maybe due to the writing style and format Grimm chose to use. It is really a distraction from getting fully engrossed in the story. Overall Grimm has a good story it is just his weaving of his tale falls short from you really getting involved.

Overall rating **** (4 stars) It’s got potential thanks to the Thomas and Will characters if it were only written not so oddly.

Check Thomas Blackwing & the Crystal Heart for yourself. 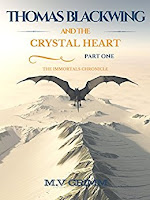 Sword and magic can keep the enemy at bay,
While bow and arrows will always win the day.

M. V Grimm is an author with a love and passion for mystery and fantasy stories. He currently works doing odd jobs while concentrating most of his attention to a flourishing writing career.
Thomas Blackwing and the Crystal Heart is M.V Grimm’s first novel and is a fantasy story of a pair of fourteen-year-old orphans who compete with others for a throne left vacant after the murder of a royal dynasty. It is available through Amazon and is the first in a planned series.
His hopes for the future are to carry on writing fantasy novels full-time and to bring them to as wide an audience as possible and when he has some time to himself he enjoys fishing, which helps to clear his mind of troubles and all thoughts for a few hours, before dreaming up new stories and adventures.