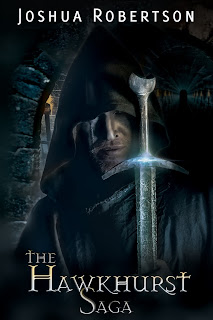 For the Fantasy lovers author Joshua Robertson has recently released The Hawkhurst Saga, the compilation of three, consecutive short stories: A Midwinter Sellsword, Gladiators and Thieves, and Ashes to Ashes. You can receive the first book in the series for free by signing up for his Newsletter.

Ten years ago, Argus Gunther escaped Hawkhurst, thinking he had left behind a desolate life and a forsaken name. Though, when he is lured back to complete a contract, Argus discovers he can't bury the past so easily. Pulled instantly into Hawkhurst's daunting political games, Argus is forced to navigate through his nightmares. Now, while in search for his freedom, he must decide whether or not there are worse fates than death.

“Nothing in Hawkhurst is close,” Argus said. His words were honest. The city was built in layers, from top to bottom, from rich to poor, from free man to slave. It would take several hours to walk from one end to the other.


“Then we have plenty of time to talk. Maybe you could tell me of the Eadfel. My friends and I speak about it often in Galoroth.”


Argus scratched his bald head. It was hard for him to believe she had any friends as much as she talked.


“I’d rather walk in silence.”


Argus swallowed, feeling as though he were at the mercy of a spoiled brat who had never had a good spanking. It was difficult to simply argue with such a person without cutting out their tongue.


Unfortunately, killing her was not part of the plan. He yielded. “The Eadfel is the name for the political estrangement or interrelation that occurs between the leading families in the city.”


“Any simpleton could tell me that. Is it not a game?”


Argus winced. “If games end in poverty, slavery, or death, then yes—it is a game.”

Astrid crooned, a bounce in her step, “It sounds horridly delightful.”

Get Your Copy Today: The Hawkhurst Saga

Joshua Robertson was born in Kingman, Kansas on May 23, 1984. A graduate of Norwich High School, Robertson attended Wichita State University where he received his Masters in Social Work with minors in Psychology and Sociology. His bestselling novel, Melkorka, the first in The Kaelandur Series, was released in 2015. Known most for his Thrice Nine Legends Saga, Robertson enjoys and ever-expanding and extremely loyal following of readers. He counts R.A. Salvatore and J.R.R. Tolkien among his literary influences.