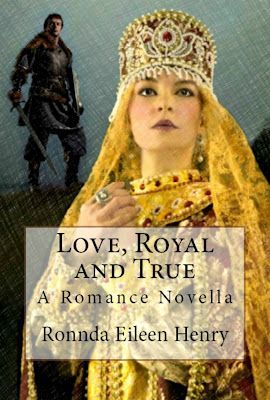 "In the medieval world of Penruddock, the Lady Hyacinth is promised in marriage to Prince Adelard from the time she is born, and the two grow up to love one another. As she approaches marriageable age, however, one obstacle after another prevents their wedding. In an unexpected tragedy, Prince Adelard's father suddenly becomes king and Adelard the heir to the throne. Forces of intrigue attempt to separate Hyacinth and Adelard so that he might marry another. Will their love for each other survive?"

Love, Royal and True is the 7th book released in what Henry calls her Flowers of Penruddock collection (which I heard will be released soon with all the books in one collection). I love Henry’s romance writing and style. You always feel good after reading her books. In Love, Royal and True though I was conflicted. When it came to the romantic leads in the story Adelard and Hyacinth, while likable characters their romance fell flat to me. I felt no love from them other than the fact the author wrote that they did love each other. They seemed more like good friends than this epic love that seemed stated. A love that survived obstacles and tragedies, which were quite saddening, to say the least. I was like man this book is depressing too!Henry is known for her sweet, pure, innocent romance novella’s that show you don’t have to go to the explicit to make a heart swoon. In Love, Royal and True it was a bit amiss.

From a writing perspective Love, Royal and True faltered as well. There were a few contradictions in the story too that were amiss as well.One is at one point it stated that Hyacinth daughter was the oldest of her children. In just a few pages back it stated Hyacinth gave birth to a son first. Huh? How? This all combined made it a lesser read than it could have been.

Ronnda Eileen Henry is originally from Michigan and was raised in California and Virginia. She read a lot of history, biography, science fiction, and Regency romances when she was young, and her two favorite authors are Jane Austen and Aleksandra Layland. She has the heart of a romantic and believes romance is for people of any age. Sweet romance is her favorite, whether it's for a teenager or a person in middle age. Retired now, she lives in Florida.