BOOK REVIEW: Of Wisdom and Valor: The Art of War. The Path of Peace ABRIDGED EDITION: Part II of the Windflower Saga Trilogy by Aleksandra Layland 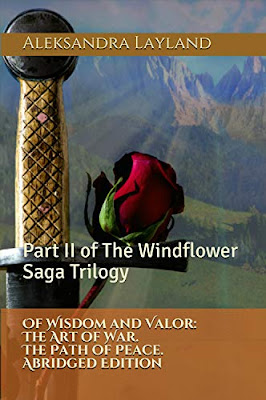 This is an abridged edition of the epic fantasy novel "Of Wisdom and Valor: The Art of War. The Path of Peace. (Part II of the Windflower Saga trilogy by Aleksandra Layland. Abridged by the author herself, she hopes it will make this story more accessible to a wider audience of adult and young adult readers. Set in a time not now and in a world not of our own in the medieval-like Kingdom of Kimbria. Generations have passed since the flourishing of the Kingdom of Kimbria under its First Golden Age. Corruption is rampant and the common people suffer under poor governance. Finally, they cry out for a monarch to replace the greedy Royal Council. Acting as Regent, the Council elects the young Duchess of Ansgar as the new Queen and orders her to marry a fearsome mercenary warlord. He fetches her from the remote convent where she’s lived for 20 years, but he takes her to his distant castle, not to the Palace so she can take the throne. The Royal Council has no intention that she will ever rule. What ensues is a heroic battle against greed, evil, and conspiracy, with the lives and freedom of the Kimbrian people hanging in the balance.

While this is supposed to be the abridged version of Of Wisdom and Valor, I still found it a bit lengthy. This abridged version is to be more appealing to younger readers though I think Of Wisdom and Valor lost something in the process.
While reading I truly missed the original full-length version. We needed that in-depth Kimbrian background, jargon to truly understand and grasp the relationship between Leofric and Keridwen. In the Abridged version, they felt like shadows of their former selves. Something was missing from them. Of Wisdom and Valor: Art of War. The Path of Peace is truly an epic read. I’d go tackle the original, though if you truly want to capture the magic of Aleksandra Layland and her epic Windflower Saga.

BOOK REVIEW: Ansgar: The Struggle of the People. Triumph of the Heart: ABRIDGED EDITION Part1 of the Windflower Saga by Aleksandra Layland 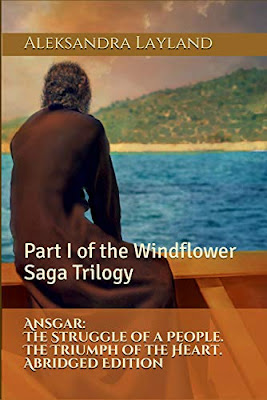 This is an abridged edition of "Ansgar: The Struggle of a People. The Triumph of the Heart. (Part I of the Windflower Saga trilogy) by Aleksandra Layland. Abridged by the author herself, it provides a shorter version of the novel to appeal to a wider range of both adult and young adult readers. The Windflower Saga trilogy is set in a time not now and in a world not of our own. It tells the story of Ansgar, his indigenous wife Keholani, and their mixed-race descendants. Part I ("Ansgar") is the story of the founding of the family in their secret homeland. A hundred years after the colonial wars, Kimbria is finally a unified kingdom but with residual laws and attitudes of a racist nature towards the indigenous people called the Kimbrii. A young man, dressed only in the robe of a monk, wanders alone in the southern Wastelands, searching for the remnants of the Kimbrii, whose culture is on the brink of extinction. He’s come to help them, but instead finds himself near death until he opens his eyes and sees her… a woman unlike any he’s ever seen before... a clan chief and leader of her people. She’ll save him from death and quietly captivate his heart. He’ll defy the conventions of the time and marry her, revealing his true identity, and founding a family that will change the future of Kimbria forever.

A breath of fresh air into an already captivating story. This abridged version of Ansgar is beautifully done! Featuring a stunning new cover, and aimed to be an easier read to draw in younger adult and teen readers into this enjoyable epic saga do just that. In fact, this is how Ansgar should have been! While the original was grand that was a bit of its problem. It was a bit too “grand”.  The book was quite lengthy. Now Layland has stripped the excessive letting the characters and dialogue gleam more. All I have to say is grand! I love the abridged version just as much as the original.

It is like it’s a whole new book to be discovered even if you read the original version. Bravo again to Layland. A lot was lost in the abridged version yet all the important parts remained to keep the soon to be a classic tale intact.

Aleksandra Layland is a retired civil engineer and federal civil servant who worked primarily for the United States Air Force as a senior installation engineering manager responsible for buildings, airfields, infrastructure, fire protection, and emergency preparedness. She also served as a Peace Corps Volunteer in the Western Caroline Islands where she helped build school classrooms and cafeterias, low-income housing, and simple village water distribution systems. Her other interests include arts and crafts, family genealogy, religion and spirituality, fostering peace in the world, and enjoying retirement with family and friends. 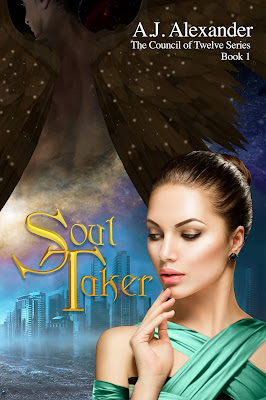