Cousins, One and All: A Jane Austen Fan Fiction Fantasy Romance Novella by Ronnda Eileen Henry and Aleksandra Layland. 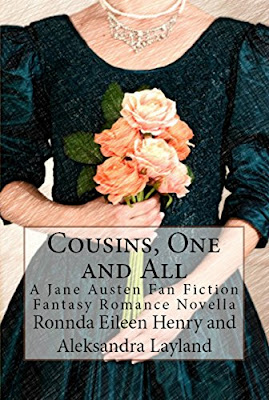 SYNOPSIS: "Cousins, One and All" is a Jane Austen fan fiction novella based on characters in "Pride and Prejudice." But with an alternate storyline focused on the second generation, and which crosses over to fantasy worlds from Ronnda Eileen Henry's romance novella "Love in Two Acts" and Aleksandra Layland's epic fantasy Windflower Saga trilogy.
The sons of Mr. Wickham and Col Fitzwilliam join the daughters of Mr. Darcy, Mr. Bingley, and Mr. Collins for a two-week holiday in the Lakes district of northern England. During the second week, two of them (Ben Wickham and Lottie Darcy) disappear for three days. When they return, they explain their absence as due to a fall into a ravine. While they were out hiking and being picked up by a gypsy and taken to his camp some distance away to recover. That is as far from the truth as it could be, but the truth is utterly unbelievable... that is, except two logical, sensible Cat Collins who is in love with Ben but has never told him. The five cousins will never forget the year they went on holiday together, and if you're a Jane Austen fan, neither will you.

Henry of the famous sweet Penruddock Romance Novellas joins Award-winning Aleksandra Layland of the epic Windflower Saga under their love of Jane Austin. The result is a sweet little read. Based on the characters of Austen's Pride and Prejudice they combine it with their own the timeless fantasy worlds they created. I must confess my fingers have never caressed the pages of a Jane Austen novel. It did not hinder this book one bit as I fell in love with these witty loveable cousins compelling me now want to read Austen herself. Fans of Jane Austen will definitely gush with delight in this book. Yet you do not have to of read a lick of Austen to understand or fall in love with this lovely, riveting romantic tale. This can really be a hard thing to do as it is based on material that has already been established. Henry and Layland though accomplish just that.

Ronnda Eileen Henry has written several sweet romance novellas set in her fantasy medieval world of Penruddock. These include: Love in Two Acts; Forged in Love; Love, Savory and Sweet; Freed by Love; and Love, Ever Strong. Two more novellas are planned to complete a seven-novella set which will be republished as The Flowers of Penruddock.

Aleksandra Layland wrote an epic trilogy known as The Windflower Saga set in a medieval-like world and featuring an indigenous people who were the victims of colonial expansion. The original novels were Ansgar: The Struggle of a People. The Triumph of the Heart; Of Wisdom and Valor: The Art of War. The Path of Peace; and Far Haven: A Quest for Certitude. A Fight for Justice. These were later joined by eight novellas, which expanded on characters in the novels, as well as several books for younger readers. Layland has since republished these in omnibus collections, joining each novel and its novellas under one cover. The first of these, The Ansgar Treasury, was reviewed by BlueInk in Booklist Magazine in September 2017. Recognized as a self-published book recommended to librarians, the other two collections, The Wisdom and Valor Treasury and The Far Haven Treasury receive equally high praise from BlueInk reviewers. The Far Haven Treasury was a recipient of a Gold Medal in the Romance Fiction category of the 2017 Florida Authors and Publishers Association Presidents Book Awards. The Wisdom and Valor Treasury were the recipient of a Silver Medal in the Fantasy Fiction category.
at January 22, 2018 No comments: