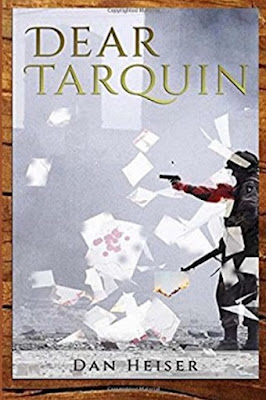 Louis has had a good life, an exciting life. Now as his life comes to an end, he is ready to share it with his eldest son, Tarquin. Louis writes to his son about his experiences during the Second World War, a story he wanted to keep to himself forever. Now as he is dying he is ready to share. Take a journey with an old man as he recalls the past and shares his hopes, dreams, and fears as a young soldier in the United States Army.

Dear Tarquin is the retelling of the events of D-Day to shortly after the events of VE Day told from the memories of an old man writing his story to his oldest son. Return to World War II with an old man as he retells his story as a young US Army Soldier.

As novice history lover I have to say Dear Tarquin is beautiful! A book has not affected my soul like this in a long time. I believe it is intolerable to imagine what these soldiers went through, but Heiser with his wring prowess does fantastically! He clasps your hand vividly dragging you down into the cold dirty ditches of war with our lead character Louis as he shares his story with his oldest son.
Dear Tarquin is breathtakingly written. Only the switching from 1st person to 3rd person is the only downside to this book. As a reader, it was kind of bothersome. In the end, though it did not take away from the story itself.  All hail our veterans who fought for freedom in this land. 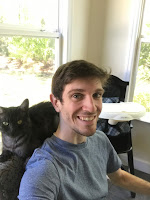 Dan Heiser is an author of historical fiction focusing on the early-mid 20th century. His previous titles include These Four Days (about the Titanic), Where I've Been (First World War),  and It Begins in Rye(first book in a six book series on World War II). A recent graduate of Full Sail University with a Bachelor's in Game Design he currently attends Norwich University to get his Masters in History. If he is not writing he is spending more time with family and friends.

Book Review: The Flowers of Penruddock: A Romance Collection by Ronnda Eileen Henry 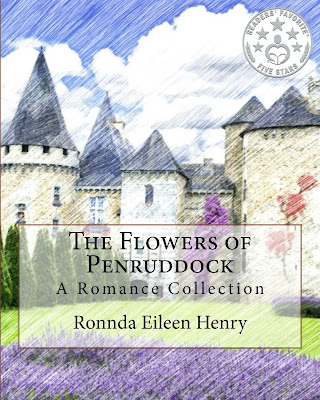 Synopsis: A collection of seven romance novellas set in the fantasy world of the vast island continent of Penruddock. Marigold, Poppy, Rose, Violet, Krysantha, Peony, and Hyacinth aren't just the names of beautiful flowers. They're also the names of the romantic protagonists in seven novellas. These women follow different paths in their pursuit of love and romance; and may experience adventure, danger, conspiracy, comedy, and tragedy on their way to finding a sweet love. For some, it's the first love. For others, a second. In spite of opposition and obstacles that sometimes block their way, they all strive for a love which is sweet and true. Three of the women are commoners. Four are of the nobility. Each in her own way challenges the conventions of her time. Come and meet The Flowers of Penruddock. Also included is the Jane Austen fan fiction fantasy romance novella, "Cousins, One and All," which takes place partly in Penruddock. Or does it? 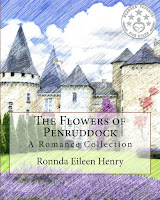 AVAILABLE NOW on AMAZON and BARNES&NOBLE

Released individually Henry has now compiled her fanciful tales into one collection The Flowers of Pendruddock: A Romance Collection. As a bonus, you get her special Jane Austen fanfic novella Cousins, One and All she collaborated with Aleksandra Layland. Each romance tale is emotionally unique and different on its own as they feature love at different stages of life. The sole connection these stories have is that each story takes place in a certain time period in the fantasy world of Pendruddock. Additionally, each heroine is named after a flower.

I personally read each novella individually as they were released. In the collection, they are placed in Pendruddock’s historical, chronological order. I fell in love with Henry’s writing style, and her sweet emotional romance tales she spun. I thrived on her innocent romantic tales that inevitably leave your smiling when you are done. If you are looking for a quick pick-me-up read Ronnda Eileen Henry the author to be.