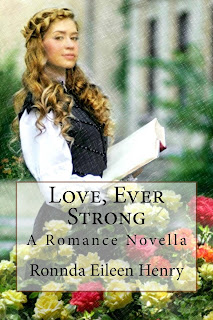 "Love, Ever Strong" is the story of a love which begins in childhood but doesn't reach fruition until years later. It's also a story of healing and change. Rose and Conor were orphans who were raised together as friends and playmates since she was 2 and he a boy of 10. When Conor is 16, he leaves their rural home to find his way in the world, not expecting to see Rose ever again. Twenty years later, their paths cross again, but life has treated them each very differently. Battle-weary and motivated by revenge, Conor is nothing like the heroic figure of her romantic girlhood memories; or is he? And Rose is no longer the little girl who used to follow him around everywhere. She's a widow with three young children who will surprise him in more ways than one.

AVAILABLE ON AMAZON and BARNES &NOBLE

Love Ever Strong is the 5th book in Henry’s romance novella collection. As a reader, It takes a lot to get me to swoon and get lost in anything romance, but Henry makes me do just that with her sweet tale of “love fruition”. Rose and Conor’s love tale is sweet, unique and fabulous!

As for the writer in me, Henry’s writing is once again smooth and poetic. Her characters are to fall in love with, well written with the perfect amount of everything. The only distraction was Henry transitioning as she skipped through the story in hours, minutes and years. As a reader and a writer, I found it a little off-putting. It was not THAT off-putting that it dissuaded me from the story at all though as I fell deeper and deeper in love with everything and everyone in this book.

Ronnda Eileen Henry is originally from Michigan and was raised in California and Virginia. She read a lot of history, biography, science fiction, and Regency romances when she was young, and her three favorite authors are Jane Austen, William Shakespeare, and Aleksandra Layland. She has the heart of a romantic and believes romance is for people of any age. Sweet romance is her favorite, whether it's a teenager or a person in middle age.
Retired now, she lives in Florida. 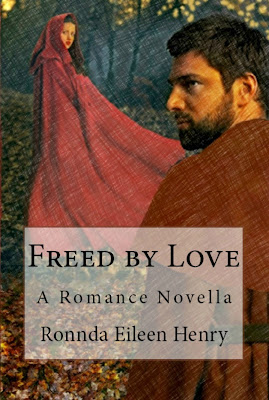 "Freed by Love" is a short romantic suspense novella with a very happy ending. Lady Violet of Ramey is a member of the minor nobility of the region of the Kingdom of Penrudduck known as Corby. She's been married three times to successively higher-ranking noblemen. All three marriages ended in her widowhood, but the last may end her freedom. Fleeing her husband's castle, the same night someone murders him, Violet is assumed guilty by many, based on circumstantial evidence. She must stand trial. If she is returned to Ravensworth Castle, the verdict is decided before she ever sees a judge.
Her family is able to arrange her trial in their district instead, but they're at a loss as to how to defend her. They hire the best of lawyers, but everyone sees little hope. That is, except for a mysterious man known only as Brother Lancelot. Freedom from jail and imprisonment for a crime you didn't commit is one thing. But aren't there other freedoms we can cherish...

I am immensely enjoying Ronnda Eileen Henry’s little historical romance novellas. In Freed by Love it once again takes place in the fictional Kingdom of Penruddock where we meet Violet who happens to innocently have the black widow curse. Once again in her third marriage, her husband ends up dead, and now Violet is named the culprit. Then enters the mysterious Brother Lancelot…well the title kind of speaks for itself.

Henry’s writes with a Jane Austen touch and a Masterpiece Theater quality. No matter who you are the ending will just make you smile.

End results?  If you want to be transported from the darkness of today’s world pick up one of Henry’s books. They will just warm your heart in sweetness.

Ronnda Eileen Henry is originally from Michigan and was raised in California and Virginia. She read a lot of history, biography, science fiction, and Regency romances when she was young, and her two favorite authors are Jane Austen and William Shakespeare. She has the heart of a romantic and believes romance is for people of any age. Sweet romance is her favorite, whether it's for a teenager or a person in middle age.
Retired now, she lives in Florida.