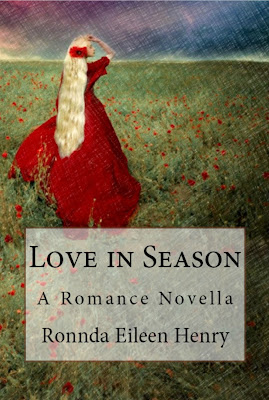 SYNOPSIS - In the medieval kingdom of Penruddock, eighteen-year-old Lady Poppy Alexandra has fled an arranged marriage to a wealthy but elderly and very cruel duke. She ends up far away in Blencathra, under the care of the widowed mother of the 28-year old Earl, Lord Reynard. The Earl's sixteen-year-old niece Lady Sherley is accompanying her grandmother and uncle to the Royal Palace to be presented to the King and Queen and begin a social season of dances with the hope of finding a suitable match. They take Poppy along but without a dowry, no one will offer for her. Or will they?

Love in Season is another charmer from Ronnda Eileen Henry. The 6th book now in her little Penruddock romance collection. Love in Season is set again in the fantasy land of Penruddock in the lands medieval era. We meet sweet Poppy Alexandra and her plight. In the recent loss of her father and a greedy cousin wanting to sell her off to the most deeply disturbed Duke (Who has a certain hidden agenda in wanting to marry Poppy.), she flees and her adventure begins. While this book fits the romance genre, it also can fit quite nicely in the historical fiction section. Henry integrally weaves hints in how real-life culture/society was back in that era within her fantasy tale.

Romance is usually not a genre I enjoy, but Henry’s books are an exception. Her storytelling is so pure, sweet, and uncomplicated and so oo la la. I gobble her books up. I’m a fan.

Ronnda Eileen Henry is originally from Michigan and was raised in California and Virginia. She read a lot of history, biography, science fiction, and Regency romances when she was young, and her two favorite authors are Jane Austen, William Shakespeare, and Aleksandra Layland. She has the heart of a romantic and believes romance is for people of any age. Sweet romance is her favorite, whether it's a teenager or a person in middle age.
Retired now, she lives in Florida.