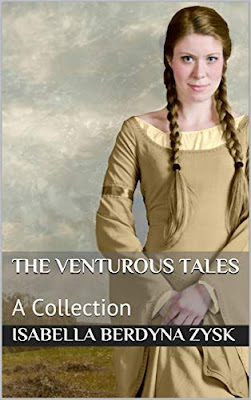 The Venturous Tales is a collection of five adventure tales set in a medieval-like fantasy world. The stories were previously published as separate novellas titled The Queen's Brother, The King's Niece, The Dowager's Daughter, The Earl's Son, and The Baron's Ward.

·        In The Queen's Brother, Elisedd is sent to a neighboring kingdom in the disguise of a pilgrim to learn what he can of two members of their royal family who are suitors for his half-sister's hand. However, he uncovers evidence of a plot that threatens both kingdoms.

In The King's Niece, Robbie accompanies her cousin, the princess, to the palace after years together in a remote convent school. There, Robbie is in disguise because the king had banished her mother from the court many years before and though her mother has since passed away, the banishment was never lifted. From the vantage point of a servant, Robbie becomes suspicious of the king's champion and his intentions toward the princess.

·        In The Dowager's Daughter, a noble family to whom Kimberly is related through her mother's earlier marriage seems cursed with the loss of one heir after another, leaving it possible for a rival family of cousins to inherit it. When Kimberly loses her own father as well, she wonders how her mother will endure so much sorrow. However, with her father's death comes a clue that one of her mother's grandsons may have left a widow and child. She sets out to search for them only to find that the road ahead is more deadly than she had imagined.

·        In The Earl's Son, a baby boy named Salvo is the only survivor of a raid on their village. He grows up in a loving foster family of foresters who knew his mother but not who his father was. Under the patronage of their earl, Salvo is educated and trained for a future as a possible lord forester one day, if he earns his knighthood. War breaks out and Salvo accompanies his earl into battle, only to find his mother has been alive all these years as a captive and the wife (and now widow) of one of the chiefs of their enemy. She returns with him to her homeland bringing her children with her, but will she ever tell Salvo who his father is?

·        In The Baron's Ward, a young mixed-race child named Eustacia Rose is left orphaned. Her father's cousin, the baron, is her guardian but he sends her to a convent school very far away, never answers her letters, and sends word when she comes of age that she's not to apply to him any further. On her way to a possible position as a lady's scribe, Eustacia plans to stop at the baron's home to see if she can reestablish a family relationship as she knows no other relatives but she's robbed of her belongings and money. She arrives at his house only to find that he's gone to his country estate and is unwell. A scribe named Alfred takes her there and Eustacia is shocked to learn that the baron believes it was she who never answered his letters and that he views her as an ingrate. Alfred becomes suspicious that someone has kept them from each other, but who and why?

Venturous Tales: A Collection is a sweet collection of historical fiction tales filled with heroism, romance, and knightly chivalry. The author has previously released these tales individually. She has now crafted them spectacularly in this entertaining collection that is a tale in itself!

We open to High King Wigmund making a royal mandate to his trusted Royal Storyteller Lady Ethelfled. He requires her to scribe five tales of royal inspiring adventures that feature 5 of their neighboring kingdoms to be told at the summit of the Monarchs. Lady Ethelfled goes back to her workshop where we find she has 5 young writers working under her. She assigns each a tale to narrate, which happens to be the individual stories Berdyna Zysk released now bound in this collection.
I enjoyed the way she set up her series of books into this entertaining collection.

You can view my reviews for 4 out of the 5 tales here. (I did not review Baron's Ward individually.)
The Queen’s Brother
The King’s Niece
The Dowager’s Daughter
The Earl’s Son

If you are a historical fiction lover, I recommend you grab this book collection up. Berdyna Zysk writing fine, fresh and empowering. 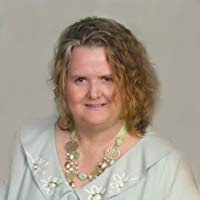 Isabella Berdyna Zysk is a self-published author who enjoys a story in which good guys win in the end even if there's a struggle along the way which all don't survive. She's a storyteller at heart and keeps the narrative suitable for both adult and young adult readers. She loves a medieval-like setting in fantasy worlds where knightly chivalry and noble valor are the goals but with access to better hygiene.
Isabella Berdyna Zysk was born in Michigan, raised in southern California and central Virginia, worked and lived in several states and foreign countries, and now resides in Florida where she enjoys retirement.
Her interests include the writings of Jane Austen and William Shakespeare, horses, trees, sustainable farming, and art.