Book Review: Sundance (The Council of Twelve Series Book 2) by A. J. Alexander 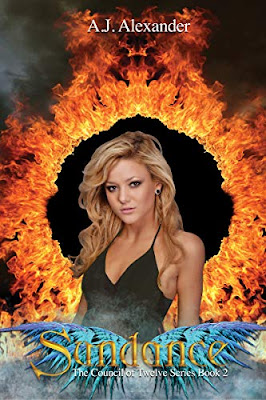 Sundance is a promising young Warrior Angel, the first in centuries to join the Divine Army. With the help of one of the most powerful Archangels, her skill and talent develop, allowing her to master some of the most difficult tasks that face her kind.
Sundance, under the supervision of the ‘Council of Twelve’ seeks to prove that she deserves her unusual gifts in the eternal fight between good and evil. Follow her adventures as she discovers love fights the good fight and finds herself in the heat of battle trying to keep her wings from being singed.

AVAILABLE NOW ON AMAZON and BookBub 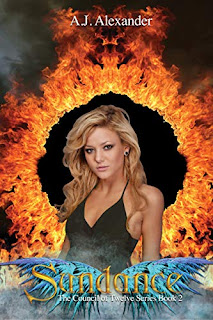 Sundance (The Council of Twelve Series Book 2) has renewed my love of fantasy/paranormal romance. I can honestly say no book has ever done that.
In book 2 we encounter 7-year-old Cara. Her parents tell her she is literally a gift from God...on a loan so to speak. You see her parents prayed for a child and God granted their wish, but she has to be returned after 7 years. When Cara suddenly falls ill with a mysterious illness, she awakens to find herself in heaven? Well sort of. She actually is told she is in sort of an angel army school to make sure if she is the right fit for the angelic army of God. Cara passes with flying colors and gains the new name of Sundance as she officially becomes a warrior angel in training. She excels at her position showcasing skills that have not been seen in an angel in a long time. This captures the attention of the Council of Twelve. Under their supervision, Sundance is exposed to her maximum potential with extraordinary powers. When evil strikes will Sundance be powerful enough to win against them? Or has her growing closeness and love with a human warrior she has fought beside hinder her? Got to read to find out!

A. J. Alexander has created a wonderful world here. Her writing is soft and poetic fantasy personified. Sundance herself is written with wit, innocence and kickass skills. Alexander's craft of writing action scenes is skilled. Alexander will have your attention at every page turn!

While this is book two in the series you really don’t have to of had to read book 1. Though it is recommended for there are cameo appearances from two of the leading characters from book 1. A delighted joy for me from having read book 1. Looking forward to the expansion of this series.

You can refer to my review of book 1 here

A. J. Alexander is a fantasy author working on her first paranormal romance series. 'The Council of Twelve' series. The first book ‘Soul Taker’ was published December 15, 2018. She has written short stories and poetry in the past. Some of her poems can be seen on her popular blog 'Writer's Treasure Chest. In her rare free time, she is spending time extreme reading, excessive pool swimming and playing monster-monopoly. Her strongest support system is her sister, most of her family, her friends and her beautiful three cats.