Book Review: The Adventures of Ollie Orangutan by Larry Landgraf 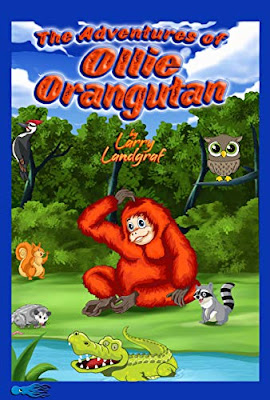 In the beginning, all animals were born wild and free. Ollie, however, was born in a cage and has spent his entire life in a zoo. Everything he knew, he learned from his mother and through the bars of his confinement. His life was totally dependent upon humans. He always had plenty to eat and it was fun watching the humans who visited daily, especially the little ones. Life was comfortable and Ollie grew up soft.

But as fate would have it, that is all going to change. Ollie is thrown into a completely new environment of which he knows nothing. Ollie will have to learn new things in order to survive without the help of humans. He will make new friends, but the real world is wild. He will also find those who would hurt him. Can he toughen up and make a new life for himself? 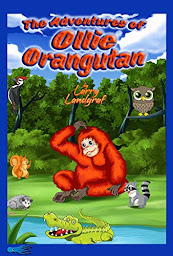 The Adventure of Ollie Orangutan could be made into a movie. Landgraf paints in the likes of such classics as "Homeward Bound" and "Milo and Otis"… well minus the children. Ollie does meet a human though in his adventure. Ollie actually comes from a zoo. To prevent overcrowding at Ollie’s zoo, they place Ollie on a train transporting him to another zoo. An accident happens that places Ollie in the wild world of the Texas swap lands. Ollie has never been in the wild before. Now his mission is survival and to find his place in this wild world. In his adventures, he meets the natives of the swamplands. Quite the characters they each find Ollie either interesting, frightening, or looking delicious! Can Ollie make it on his own?

I recommend The Adventures of Ollie for ages 7 and up. The book's goal is to teach kids the trials of life in an entertaining way. Another point out is The Ollie character is sweet and nice as can be, but he also is no fool either. Thus, showing kids being kind is a strength, not a weakness. I liked that. I read this to my twin boys (ages 7) at bedtime. A new chapter each night. They enjoyed it. It also got us all talking and having a discussion afterward. Ollie is a delightful book to bring family togetherness.

A former commercial fisherman and to save his fishing career Larry stepped into the literary world where he wrote his first book in 1986. The book and the career failed. After retiring he wrote his second book in 2012 “How to be a Smart SOB Like Me”. His next book was published in 2015 titled “Into Autumn–A Story of Survival” Then it was republished again in January 2017. The sequel “Into Spring–The Next Generation” came in January 2017 and earned him a finalist spot in the IANI (Independent Author Network) Book of the Year contest. Titling it The Four Seasons Series “Into Winter” and “Into Summer” soon followed.

“How to be a Smart SOB Like Me” which is considered his autobiography was re-published in 2017.

Many people mentioned “Into Autumn” would make a wonderful movie, so he took it upon himself to write the screenplay. “A Tempest in Texas” is his rendition of that script. In May 2017, “A Tempest in Texas” made the semi-finals in the Los Angeles Cine-Fest screenwriting festival. Shortly thereafter, it made “finalist” in the Influx Magazine Festival. In October it made “finalist” in the New York Screenwriting Festival and at the end of the month is in the hands of two producers in California.