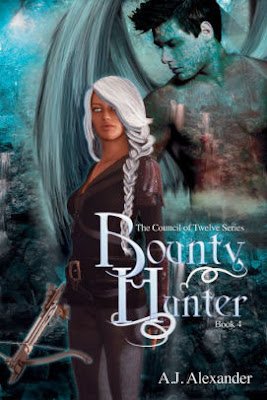 When Centriel roams the Earth in a dark mood and atypical despair, in a mountain clearing, far from humankind, he unexpectedly discovers a runner, followed by a petite hunter. The way the woman treats the giant fugitive amuses the Archangel, but he quickly learns that neither of them is what they seem to be.

Simin Arnatt is an extraordinary woman. Her occupation as a Bounty Hunter takes her all over the world, as she follows her prey to the most unusual places. She would have never expected to meet the famous Centriel while on a hunt. When he offers to help her, she feels the enormous attraction, but she knows, with the secret she holds, she could never dare to hope for love. 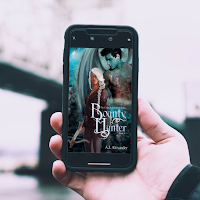 Bounty Hunter is 4th book in ‘The Council of Twelve Series’ If you have not read the other three, I advise you do such. Especially if you happen to by chance start your introduction into the Council of Twelve Series with this book. It’s the perfect YA fantasy/ paranormal romance book that adults will gobble up as well. In Bounty Hunter, we meet Centriel the youngest Arch Angel in the Council of Twelve. A bit forlorn as the others have found their consorts or at least have a “someone” he decides to take a flight to clear his thoughts. He finds a clearing to land and rests on a rock only to stumble upon a scene as we meet Simin Arnatt a petite, but fierce bounty hunter with a secret. She bursts through with her prey and Centriel is stunned. Centriel steps in when her bounty the dangerously charming shadow demon Rapha Golden requests the Council of Twelve asylum. This very act throws Simin and Centriel into a fire that instantly ignites them in more ways than one.

Bounty Hunter is giddily delicious! So much fun to read! Alexander instantly welcomes you back into her luscious world with characters that are phenomenally created big or small. Alexander locks your eyes in at first sentence and you fall easily into her world and get lost. you do not want to put the book down. 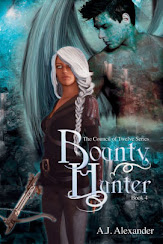 A.J. is a fantasy author working on a paranormal romance series, called 'The Council Of Twelve' series, She has written short stories and poetry in the past. Some of her poems can be read on her blog 'Writer's Treasure Chest. In her rare free time, She is spending in extreme reading, excessive pool swimming, and playing monster-monopoly. Her strongest support system is my sister, most of her family, her friends, and her three cats.