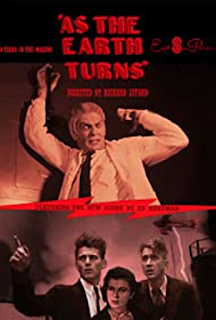 A 1938 silent sci-fi film never released by a 20-year-old filmmaker in Seattle (Richard Lyford) who went on to work for Disney and direct an Award-winning Academy film (The Titan). Well-known composer/producer Ed Hartman (The Blind Side, The Cold Light of Day) restored, composed, and produced the film bringing it back to life to be seen. Owner of the film estate and stock Hartman has taken the film on the road having it go on to win 134 awards. This Halloween, it was even currently featured on TMC (Turner Classic Movies)! (2021)

Also Available on DVD/Blu-Ray with extras* **Includes "It Gets in Your Blood" award-winning documentary about Richard Lyford at TCM SHOP  AMAZON and WALMART. 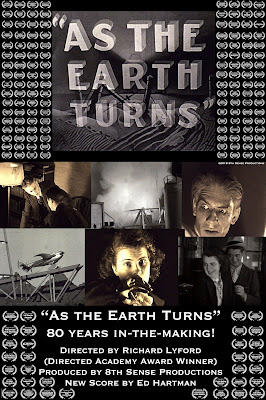 Debuting with the catchphrase "80 years in the making, "As The Earth Turns" has been beautifully restored, turning it into a film masterpiece! I often got lost forgetting this film was originally from 1938. It looks so crisp and clean. All behind the restoring this old film deserves accolades and accolades they have earned. The film has been entered into 122 festivals to date and won over 134 awards and nominations combined.
Being bombarded with modern movies today and with CGI and special effects, As the Earth Turns is a step back in time. An oldie but goodie As The Earth Turns still rocks it out of the park with excellent entertainment value. I loved this film! It shows that special effects don't make a film; it's the storytelling. Lyford (who wrote the piece as well.) was inspired by "The Man Who Rocked the Earth" by Arthur Train and Robert Williams Wood (1915) to tell his apocalyptic war tale.
A true indie filmmaker, pioneer Richard Lyford, and his camera work were visionary! All future film schools should include Richard Lyford as a filmmaker to study. You could learn a lot from his innovative filmmaking prowess. Making movies was in Lyford's DNA. It was no wonder when this project came across composer and producer Ed Hartman's desk; he hopped on board.
Not only did Hartman help resurrect this lost film, but he also produced and composed a whole new score for the film, which fits seamlessly in with the era. As a bonus, you can also find a follow-up piece titled "It's Gets in Your Blood," a short documentary on Lyford himself.
It is a fascinating piece as Lyford basically built a filmmaking empire in his own backyard with just family and friends, having had written 58 stage and screenplays by the time he was 20. In fact, Hartman and 8 Sense production are currently in the works on a biopic piece on the life of Richard Lyford. I can't wait for it! Follow for updates at https://www.astheearthturns.com/.