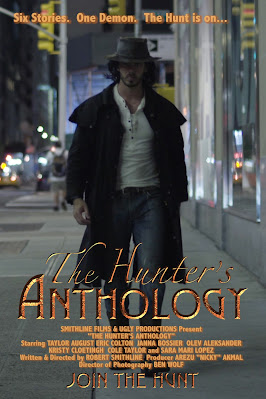 Six strangers find themselves trapped in a New York City subway by Mac, a mysterious man who claims to be a demon hunter. Insisting one of them is evil, he peeks into their souls discovering five eerie, supernatural tales: a desperate woman goes to a fortune teller, newlyweds discover a creature lurking outside their apartment, a young man visits an insane asylum, bullied twins discover a wish-granting coin and a man lusting after a co-worker discovers a magic potion shop. It's then up to Mac to solve the mystery and destroy the demon amongst them.

AVAILABLE TO WATCH ON Tubi and Amazon Prime

Reminding me of one of those late-night syndicated T.V. shows I used to watch in the 90s (Forever Knight anyone), The Hunter's Anthology series is an enjoyable watch. As the premise states, six strangers get trapped on a subway, and one is a demon. It is there that our demon hunter Mac (Taylor August) must peer into each one's soul to find which one is the demon. Each episode is Mac looking into a soul as each is connected to a supernatural tale.

There are five episodes, each highlighting a passenger.

Episode 1: We meet Tabitha (Janna Bossier) and her story in  The Fortune Maker.

Episode 2: Married couple Madison (Kristy Cloetingh) and Clint (Olev Aleksander) in Channel 14 as they discover they can view their new apartments security camera on their T.V. only to see something they wish they did not see.

Episode 3: Visit to the Asylum is Steven's (Cole Taylor) story that is more psychological horror than supernatural. Or is it?

Episode 5: Rod's (Eric Colton) story in  Lust Potion Number Who Cares leads to a who lust potioned who? Only ending with some sinister results.

Written and directed by Robert Smithline, The Hunter's Anthology is an easy one-day bing watch, and each episode pulls you into the next, leading to its twist ending. Benjamin Wolf, leader on cinematography, does an upscale job for indie filmmaking, and everything is shot and angeled smoothly and beautifully, making it very lovely to watch.

Acting-wise, Taylor August's cowboy demon hunter motif, while some may say it is cliché, it grows on you. August brings a mystery yet vulnerability to his role as Mac well. Hey, if you hunt demons all your life, you'd become a grizzled cowboy loner too. Plus, he is gorgeous so whoever dislikes him are jealous haters. Anyway! 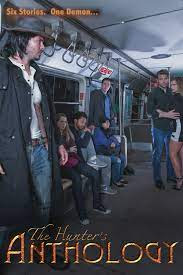 However, Eric Colton (Rod) and Cole Taylor (Steven) also shine in their roles, as does the rest of the main ensemble cast and co-stars. Yoko Hyun (Mooni) in Lust Potion Number Who Care is flamboyant and hilarious in her banter with Eric Colton's Rod.

In the end, I would be interested in a season 2 following more adventures with the smoldering Hunter Mac.